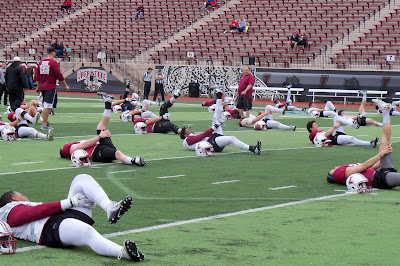 Art Link doesn’t need a lot to motivate him.

“We were eighth in the country two years ago on third down [defense] and last last year,” Lafayette’s defensive coordinator said Saturday following the 13th of 15 spring football practices in Fisher Stadium.

“When you get to third down and can’t find the right identity, that’s tough. All of a sudden, you have to get back and re-establish an identity to get excited about getting off the field. That’s huge. I think we’ve done some of that and we’re still working on it.”

For the record, opposing teams converted 90 of 159 third-down plays (57 percent) to first downs – and sometimes touchdowns – in 2016, and that weakness contributed a lot to Lafayette’s 1-10 final record. The previous year, in which the Leopards were 5-6, opponents converted 48 of 162 third-down attempts (30 percent).

Injuries were critical. I remember senior Chris Brockman telling me at Lafayette's media day in July that “five-and-six isn’t good enough.” The 225-pound linebacker was coming off a junior year in which he was No. 2 on the team in tackles with 77, including three sacks and seven tackles for loss. He was a perfect fit at the “Strike” position – a hybrid linebacker-defensive back – in Link’s 4-2-5 alignment.

But Brockman suffered a foot injury before the season ever started and didn’t play a single down all year.  Then, in the season opener, another key component in the defense, safety Draeland James, suffered a leg fracture.

Those two early losses were just the tip of the iceberg before the season ended. The secondary, which was touted as among the best in the league preseason, was devastated. Five different players started games at free safety and also at one cornerback spot, and not a single player was able to start all 11 games. The problems were never more evident than in the third-down situations.

Two of the projected 2016 starters in the secondary – rising sophomore Kaizer Butler at free safety and rising senior James at strong safety – have been in “blue” practice jerseys during the spring camp, but because of a change in format, they have been a lot more active in the 11-on-11 drills than they would have been under the former full-pads system.

And Link likes what he has seen.

“We’ve definitely become closer as a group; our guys have learned how to play next to each other,” Link said. You have guys like [Jerry] Powe and Mike Root, who didn’t play much last year, playing next to each other, and they’re starting to get a feel. The first 11-15 [players], I feel real good about. You want to get to where you have 22 of those guys, and we will. But I really like our first group [now].”

Powe came to Lafayette as a 185-pound linebacker. He was a starter in six games, at three different positions, as a freshman. The last three were at “Strike.” He has really benefited from Brad Potts’ strength and conditioning regimen and is now at 210 pounds. He, along with linebackers Root (235) and Brandon Bryant (225) have the makings of a solid group in the center of that Lafayette defense.

“Powe is a long guy, and he can cover receivers in cover one situations,” Link said. “He’s working hard and I’m happy about him and where he’s going. Last year, “Strike” was a bit of a battle to find the right guy and I don’t know that we necessarily had it all year. Dennis Bencsko did the very best he could (71 tackles No. 2 on team, also 2 interceptions), but I think we now have the right guy for the position and … the reinforcements are coming in the fall and that depth is there.”

The defensive guys had a good time on Saturday. Bryant, who I think has to be as good as any linebacker in the Patriot League, was running around and cheering on his buddies when he wasn't on the field. And, some of the interior linemen seemed to be able to hold their ground in battles with the offense.

If Link has been happy with the way things have gone this spring, so has Lafayette’s offensive coordinator, Mickey Fein.

“I really like the energy and attitude out there,” Fein said after Saturday’s practice. “It’s been night and day from the fall to the spring. The kids are really excited about playing football. You can see it. They’re out here and bouncing around, and that is contagious. It’s something I’m excited about with those guys.”

Of course, any conversation with Fein is likely to begin with a discussion about the quarterback spot, and the former record-setting University of Maine QB seems happy to have the responsibility of choosing between a pair of seniors, Drew Reed and Blake Searfoss.

“Those two guys are really battling,” Fein said. “Both of them are solid. They both know what they’re doing. They both won football games for us here. They keep on pushing each other and that makes my job easier. They know they have a guy right next to them who can play as good as them. That’s the ultimate thing. When you have competition, those guys will rise to the occasion. Both of them have.”

Saturday’s practice included three periods of 11-on-11, and while there was no tackling, the presence of officials gave those periods a good football feel. The running game is hard to assess under these conditions, but DeSean Brown, C.J. Amill, Rahjan Meriwether and Tyler West all got some work.

Searfoss had a pair of “touchdown” passes during the “live” portion of the practice – one a 32-yarder to 6-4 Matt Mrazek and the other a 40-yarder to converted quarterback Josh Davis, who’s been at wide receiver less than two weeks. But later, Searfoss made a bad read and was picked off by Butler in one of the big plays of the day for the defense.

Mrazek missed the last three games last year with a broken collarbone but still led the team in receptions. He has great hands and reminds me more and more of former record-setter Mark Ross. He seems to use his body in much the same way Ross did for two great years.

“Our playmakers are starting to come along,” Fein said, adding, “It’s good to have Matt back in the fold and running around, and those other receivers are coming along and doing some good things, so I’m really excited about that.”

Tim Vangeles, who missed the first five games last year with an injury, seems to be rounding into 2014 shape. He was the second leading receiver that season even though he started only six games. Davis came up limping at the end of his athletic catch but received lots of kudos from other WRs, who seem to have invited him into their club without reservations.

The offensive line was down in numbers on Saturday, but Fein said of the group’s improvement, “We’re not all the way there yet, but we have some guys who are learning on the fly and some kids who haven’t played a lot of football are playing a ton in the spring and they’re getting better. I’m excited about all of that.

“We still have some stuff we have to know about and we’ll find out in fall camp, some smashing stuff with the tight ends, particularly. Can we smash with those guys? That’s something you can’t really find out about now.

“But as far as knowledge, there haven’t been a ton of mental mistakes. That’s good to see. That’s a good part of it. There’s a lot of mental gymnastics behind it and they’ve been pushing through pretty well. The big thing was to make sure we were still lifting hard. Those young guys have to get physically stronger.”

As for the bottom-line assessment of the new spring-camp format, Fein said, “The whole experience, we’ll find out in the fall how it is, but I’m pleased … pleasantly surprised by how it’s coming along.”

EXTRA POINTS – Head coach Frank Tavani said 162 high school junior prospects and their families visited practice a week ago. They filled a couple of sections of the visitors’ grandstand, and Tavani said he had to address the group via microphone from field level. … More than a dozen members of the 2016 recruiting class were at Saturday’s practice, and Tavani spoke with them briefly after it ended. Not all of the visitors were locals, either. I spoke for some time with Patrick and Catherine Nelson, whose 6-8, 270-pound tight-end son David will give the Leopards a bit more Tennessee flavor – he’s from Memphis, and Reed is from Lakeland, Tenn., in the same area. Nelson was a highly recruited basketball player before he decided after his junior year of high school that he wanted to concentrate on football. He has the size and athleticism and will bear watching … There will be a shift in emphasis for the final two spring practices. For the first time, the Leopards will devote some spring-camp time to the year’s opening-night opponent, Central Connecticut State. The meeting on Friday, Sept. 2, will be the first ever between the two teams. Lafayette was originally scheduled to practice on Tuesday and Thursday, but because of a scheduling conflict, the Thursday practice has been moved up to Wednesday.