Non-stop action is the opening-day highlight for 'Pards 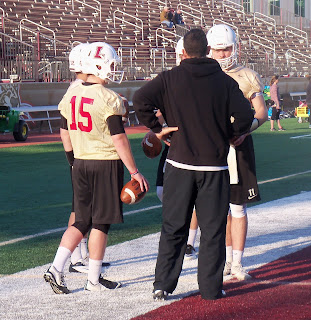 Well, we found out on Tuesday the John Garrett answer to how you go about giving four quarterbacks enough of a chance to make an impression on the coaches who will ultimately decide their fate.

You run concurrent passing drills on both sides of the 50-yard line, allowing the coaches to stand in the middle and look in both directions.

Austin McCrum, Josh Davis, Mike Lewis and Blake Meyer threw lots of passes in the brisk two-hour session in Fisher Stadium, and while it was impossible to keep an accurate count, I’m guessing there was not a big difference between first and fourth.

Davis is the only one of the four to have ever thrown a pass in his collegiate career – he completed his only pass in Lafayette’s Yankee Stadium win over Lehigh to end the 2014 season. It was the final play of the first half and was a 20-yard completion to Ross Scheuerman.
Read more »
Posted by Paul Reinhard at 7:18 PM 1 comment:


The quarterback competition at Lafayette got its eighth official candidate when Sean O'Malley of Beverly Hills, Calif., was added to the roster on the eve of the start of spring practice.

At the same time, Michael Turk, a punter who has a good pedigree, also was officially added to new coach John Garrett's class of incoming players, bringing the number to 21 for the year.

O'Malley and Turk won't take part of the spring camp that begins today, but both could make some waves in summer camp.

O'Malley is listed as a three-star recruit by 247sports.com. He's 6-2, 200 pounds and is his high school's all-time career leader in passing yards and touchdowns. Check out his video; impressive stuff.

His addition means that two of the eight players vying to succeed Drew Reed as the Lafayette QB have California roots. Josh Davis came to Easton from San Juan Capistrano as a QB, was moved to wide receiver last year and has switched back to QB to take part in the battle this spring. He will be a senior in the fall.

Punter Turk is from Dallas, Tex., and his uncle Matt punted in trhe NFL for 19 years and his uncle Dan was an NFL center for 15 years. His brother Ben was a punter at Notre Dame. Michael spent an entire year training with his uncle Matt in preparation for college. And with four-year Lafayette punter  Ryan Forrester graduating, Turk's arrival is perfect.

Zooming in on the Leopards' spring-camp roster and plans

OK, so John Garrett isn’t ready to talk about personnel on his Lafayette College football team.

But coming fast to the start of the spring-practice period, we need something to work with, don’t we? I doubt that I’m very good at this, but I’m going to take a shot at a camp starting lineup based on players who should be in uniform when things get under way on Tuesday (4:30 p.m.) in Fisher Stadium.

First, a bit of factual stuff. A look at the roster on the Lafayette website tells us that 11 Leopards will have different numbers than they wore last year. They area

And now, for a first unit. For entertainment purposes only.

Ready for "new era" of Leopards football on March 21?

Are you ready for some football?

With snow on the way tonight, I thought I’d tease you with a little spring football notice.

I sat down with Lafayette’s new head coach, John Garrett, earlier in the week. He was happy to talk about the official start of the football phase of his new job, but by the end of our 45-minute chat, I hadn’t gotten a lot of specifics out of him.

Why? Well, as of now, all he really knows about his Leopards is what he sees in the weight room or during conditioning workouts or on film of last year’s games. So, while we went round and round about some things, we barely touched personnel.