Is "incomplete" grade for Ms Freeman too generous?


The guys on the Lafayette Sports Fan Forum are preparing for the opening game of the new football season, but in the midst of everything, they have come up with an interesting chat on the first half year’s performance by director of athletics Sherryta Freeman.

Her task was going to be anything but easy.

At the time she was hired as the successor to retired Bruce McCutcheon, Lafayette coaches and alumni were awaiting the results of what was thought to be an extensive review of the entire college athletics program.

The report’s release had already been extended twice, and at this point, it’s still known by only a select few. Sounds like a big waste of money right now.
Read more »
Posted by Paul Reinhard at 1:44 PM No comments:

I confess: Brain fade resulted in a terrible error


I messed up big time in constructing the lead of my Lafayette football Media Day feature story in The Morning Call this morning.

I was trying to compare last year's anemic offensive output with those of past Lafayette teams, and in looking at the Team Records page in the media guide, my brain misread a section referred to as "RUSHING DEFENSE."

What they REALLY meant was those were numbers Lafayette defenses had put on their opponents.  The 1939 Leopards were just 4-5, but they shut out three opponents and gave up just 67 points in the other six games. The 1940 team was an undefeated 9-0 with four shutouts and 33 points allowed. Those defensive stats came from those two seasons.

The Lafayette offense's numbers in 2017 were 430 net rushing yards, 1.7 yards per rushing attempt and 39.1 average yards rushing per game. So, the actual fact is that the Leopards' numbers were all lower than the all-time marks Lafayette defenses had posted against opponents in all the years such stats were being compiled.

The bottom line in my thought process -- that Lafayette must post better rushing stats this season if it hopes to increase its chances of turning around the program that has won only six games the last three years -- is still the same.

As for me, I can only hope my brain is more efficient going forward than it was Tuesday night.  To Coach Garrett and the team, use my blunder as motivation to stick it to me in 2018.

Posted by Paul Reinhard at 1:01 PM No comments:

The pads are on and the hitting begins on Day 5 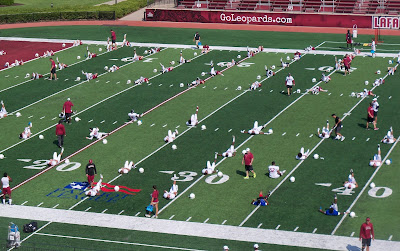 I took a couple of baby steps on Wednesday morning when I quietly arrived at Fisher Stadium for the first day of full-pads practice for John Garrett's Lafayette football team.

I took a seat at the top of the home grandstand (in the shade), sitting with a couple of guys who played football for the Leopards during my first go-around as the team beat writer -- in the late 1960s-early 1970s under Harry Gamble and Neil Putnam. Jack Bourger and Phil Noto are now two of the most interested alums.

I just wanted to see for myself what was taking place. No Morning Call story to be written, so I didn't look to interview anyone when the session was over. I just wanted to look.

Here are a couple of quick observations.

Read more »
Posted by Paul Reinhard at 9:35 PM No comments:


It was three days before Christmas, and during a 7:15 a.m. telephone call, Joe Conlin had just accepted the job as head football coach at Fordham University.

He hurried into the kitchen to share the news with his wife Karen, but to his surprise, she “was crying,” Conlin said. “Did you not want me to take the job?” the stunned Conlin asked.  “No, they’re tears of joy,” Karen responded.

The 38-year-old Conlin, who was the offensive coordinator last season at Yale, which compiled a 9-1 record and won the Ivy League championship. He said giving the news of his decision to go to Fordham to the coaches and players at Yale was tough for him. He spent six years building that relationship.

Conlin also went to the NCAA FCS playoffs seven years in a row (2004-10) as an assistant at New Hampshire, is now charged with reversing the fortunes of a team that was 4-7 last year despite having running back Chase Edmonds and quarterback Kevin Anderson among its offensive weapons.

Edmonds, the league’s all-time leading career rusher even though he missed five games last season, is now in the NFL; and Anderson, who threw for 73 TDs in his career, is also gone. So, Conlin was asked during the league’s preseason teleconference call, how is the Fordham team going to look different in 2018?

“Offensively, we won’t be that different,” Conlin said … “a little more spread out … we’ll utilize more formations than they did. We’re still going to be a zone team, utilizing tempo, take shots down the field with play action … still do some of RPO (run-pass option) and things like that … we’ll end up with balance, but the offense will strive to be more ground based, kind of open up the pass game with a ground attack, try to establish ourselves on the ground each and every game.

“Defensively, I think we’ll be markedly different … a little more agressive in terms of blitz packages and things like that … more man coverage. But hopefully, you’ll just see the guys playing hard, running to the football and having fun playing the game. That’s very much a hallmark of our program, to see our kids generally enjoy playing together and for Fordham.”

But because 15 spring practices were the only exposure the Rams’ players have had to the thinking and working of Conlin’s plan, the coach, asked about expectations for 2018, said, “To think about the season at this point would be kind of a wasted exercise. Now is just about 25 practices before we play a game and making the most of every day we have to work together before we open with Charlotte. In terms of the players, we’ll keep it very simple. This is as close as these guys are to NFL players. No classes. No distractions. Excited to attack each day and get a little better.”

Fordham, you’ll remember, went four seasons (2010-13) in which its league games didn’t count in the standings because it adopted merit-based scholarships while the rest of the league was operating on need-based aid.  The Rams struggled for three years, but went 12-2 in the fourth. And in 2014-16, they compiled a 16-2 league mark, winning the title in ’14 and finishing second the other two seasons.

The big shocker for the Rams in 2017 may have come against Lafayette. The Leopards came in off a 10-7 win over Holy Cross on a last-second field goal but had allowed 166 points in four losses. Fordham had an identical 1-4 record and had allowed 211 points in its four defeats. Still, the Rams figured to be the favorite.

Fordham led 10-0 after three quarters, but Leopard freshman quarterback Sean O’Malley had what might have been his best effort of the season in the fourth period, hitting 10 of 11 passes on one drive and four more on another, teaming up with Rocco Palumbo for s pair of touchdowns that produced a 14-10 victory that put Lafayette at the top of the league standings.

Posted by Paul Reinhard at 4:56 AM No comments:

Football camp heads the grapevine chatter -- or does it?


I didn’t attend either of Lafayette’s first two preseason football camp practices, but I took a look at photos on the college website and a one-minute video featuring a miced-up head coach John Garrett. I found both interesting.

I was hoping to get some first-hand stuff from someone on the Lafayette Sports Fan Forum, but they were off doing other things, I guess. I did, however, pick up some disturbing non-football grapevine information from the LSFF guys. And eventually, I did get some unofficial gossip about the football practices.

And finally, I took a long look at the roster to see what I could come up with. Anyone can do this kind of digging if they’ve got nothing better to occupy them for part of an afternoon.

From perusing the roster on the website, and comparing it with the roster in last season’s media guide and with news releases about 2018 recruits, I came up with the following:
Read more »
Posted by Paul Reinhard at 5:47 PM No comments:

The last time Colgate University opened a football season with a Patriot League game, the Raiders blew a 14-point lead and trailed Georgetown 19-14 in the final minutes and, with 5.6 seconds left, won the game on a trick play – a 2-yard pass from wideout J.B. Gerald to DeWayne Long.

“We should have lost,” Colgate head coach Dan Hunt, said, remembering that game during the Patriot League’s media teleconference last week. “They were in a take-a-knee period and fumbled and we went on to run our two-point conversion play from two-yard line and won; but if you had said after week 1, ‘you’re about to go undefeated and play for the national title,’ I’d have said, ‘You’re crazy.’ Then the next week we go out and beat Buffalo.”

Colgate did go to the championship game, where it was routed 40-0 by K.C. Keeler’s Delaware Blue Hens.
Read more »
Posted by Paul Reinhard at 5:21 PM No comments:

I listened in on the entire Patriot League teleconference call last week. While I was most interested in the Lafayette segment, I thought perhaps I could do some short preseason camp blogs about the other as well. Since the call went alphabetically, I will, too.

Jake Wilson threw two touchdown passes in Bucknell’s 2018 spring football game. John Chiarolanzio, who played in nine games last season for the Bison and finished with the most passing yards in the 2017 stats, was also competing for the starting job for 2018.

But it was Logan Bitikofer, a rising sophomore, who impressed the Bison staff the most, prompting head coach Joe Susan to name him as the starter going into preseason camp.

Speaking on the Patriot League’s teleconference call last week, Susan said Bitikofer “has the quarterback job, but there are a couple of other quarterbacks who think they have the job, too, which is exciting.”
Read more »
Posted by Paul Reinhard at 5:57 AM No comments: